Now Nienaber wants the Boks to be given more respect.

Forum » Rugby » Now Nienaber wants the Boks to be given more respect.

When the Boks WC win was universally applauded and things only went south after Harrassmiss left the reservation. The commentators are nothing if not respectful to the Boks as were the reporters until Tapegate.

Man this is truly pathetic. Score a few more tries like we did against Italy against top 5 opponents and the press will be great. Nobody ever won respect by asking for it.

Respect is earned.....and both R&N should practice what they preach.....with all the Hoo ha around Rassie ( which he loves by the way) what kind  of respect do they think they deserve? Both of them are high as kites,  on being the main guys....sooner or later they will have to come down....honestly these 2 has showed all they have in form of coaching and Structures.....what new and Positive can still come from them to grow SA + Bok Rugby??? Zero is the Answer!!

The dark side of the South African psyche.

n dribs and drabs the Springboks file out for training. Jesse Kriel is first, Faf de Klerk one of the last and Willie le Roux, in a tracksuit and visor combo only someone playing with his current swagger could pull off, somewhere in between.

Soon the serious stuff begins and support staff can be heard asking where he is. Roughly a minute before the cameras have to be packed away he strides out, whips off his jacket, takes a tackle shield from Siya Kolisi and gets straight into the action. Welcome to the Rassie Erasmus Show. 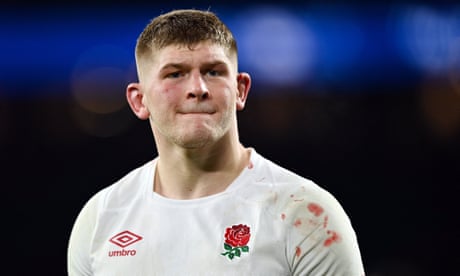 Say what you will about Erasmus but you can not question his sense of theatre. There is little doubt this appearance was choreographed. He was banned from matchday activities for the win against Italy last week and will be for the game at Twickenham on Saturday but during the week it is business as usual for the Springboks’ director of rugby.

A couple of hours earlier, the head coach, Jacques Nienaber, named a squad featuring eight changes before taking questions, ostensibly about his selection but aware enough to know he would be asked about Erasmus. He takes a few questions until he is asked if he supports Erasmus putting videos on social media. The intervention is swift, Nienaber is instructed not to answer and the rest of us told this is not a Rassie press conference.

This is how Springboks deal with the social media outbursts that have led to Erasmus’s two?match ban, coming soon after a 12-month ban for similar behaviour. The trouble is, without properly addressing the issue there is no contrition, not even a hint of acknowledgment of any wrongdoing. Into the vacuum comes the implication that the rest of the Springboks setup agrees with Erasmus. That his actions are endorsed. Equally, the suspicion there is no one within the union with nearly the sufficient power to control him. 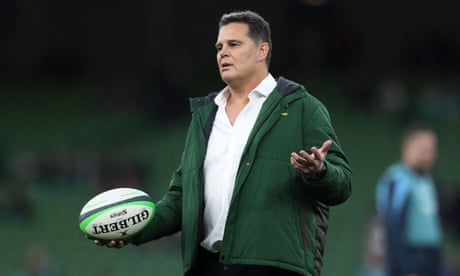 Indeed, with even the briefest of glimpses of Erasmus at training it is clear his players and staff are in thrall to him. The more his behaviour is criticised, the higher his pedestal. You may think condemnation from a World Cup?winning captain in John Smit may elicit some form of remorse. Or wonder how they will react to comments from England’s forwards coach Matt Proudfoot, who worked under Erasmus during the victorious 2019 World Cup campaign, that “the Springboks is a brand designed to bring hope to the country”.

But all we get is a snapshot of the siege mentality Erasmus has fostered with his outbursts. That, you suspect, was the point of them all along.

“In terms of Rassie’s ban, we focus on rugby and I guess there will be a lot of questions about the ban. As a coach, I don’t want to go into those things. I will focus on the rugby more. Sometimes, it’s disappointing when there are only certain facts that go out and then people from the outside obviously only have those facts that are available and they form an opinion on something that has happened. And obviously they don’t know all the facts. It’s quite sad if you think about it. If all the facts are out there, people would form a different opinion.”

Nienaber is an intelligent man and “unfortunately things went that way” is the closest he comes to directly addressing Erasmus’s ban. But whenever he tries to take the subject back to his team’s preparations – hampered because he cannot select players based in England or France with this match outside the official Test window – he gives only the impression of fiddling while Rome burns. He somewhat tied himself in knots too, when pressed on what the “facts” he refers to are. “It probably will come out,” he said. “You know that there is a lot of confidentiality that we’re not allowed to talk about, especially with media. I’m not the only coach that would say that. Eddie [Jones] has said that before. It’s stuff we can’t discuss. But we know the facts.”

The latest rugby union news and analysis, plus all the week's action reviewed

This sounds like more conspiracy theorising until he is asked specifically if he means facts not widely available about refereeing decisions. “No, just in terms of development and where our game is going, certain skill?sets we are trying to develop – stuff like that. Not refereeing stuff, rugby stuff. Technical, fundamental stuff. Gameplan.”

Confused? You wouldn’t be alone, but he goes on, questioning the narrative that the Springboks are “boring” and wondering if they will ever get the “respect” they deserve.

“That’s what I mean when I say the facts aren’t all out there,” he said. “People form an opinion on style of play. We can’t control the narrative that gets put out there that we’re boring, we don’t attack, we just kick, we just tackle. All the energy you put into that, you’re not going to change that narrative. If we’ll get respect, ever, I don’t know. As long as we’re comfortable with what we’re putting out there and what we’re trying to achieve, and are open and honest with each other and as a group – players, management, staff members – we’re happy.”

Never more so, it seems, than when the world is against them.

Based on what the NeinNobody has delivered thus far I find it awfully difficult to understand why anyone would respect him.

Yep...pretty much sums up what a lot of people on here think of you..

At least I post my own opinion, unlike you who just copies and pastes articles from other people ...

Then we get  types like dense having a go at the great man. Its laughable.