Joe Marler says if he was elected as World Rugby chairman he would appoint SA Rugby director of rugby Rassie Erasmus as his right-hand man.

Marler was speaking to the Daily Mail in a wide-ranging interview on rugby’s politics, governance and marketing.

During the interview, the England prop revealed what he would do if he was hypothetically appointed as the new World Rugby boss in 2023.

“Rassie’s gold. He’s marmite but he’s got people talking about rugby,” Marler added. “I love him. I f***ing love him. I think Eddie Jones should start running the water on like Rassie does, although by the time he reaches the middle of the pitch the ref would already be telling him to get off!

“Rassie seems very true to himself. I’ve never met the bloke but I got his staff to pass on a bottle of red to him after we played South Africa in the autumn. He is who he is. He does what he wants. I love anyone who is authentic and stays true to who they are. You don’t have to agree with them.”

Joe Marler is a legend - he is an intelligent guy with a wicked sense of humour. Is hilarious on all the TV shows he appears on

Can’t help but agree with Marler.

Funny how “playing to the edge of the law” is fine for some but when others do it then suddenly it brings the game into disrepute.

Spot on Marler has Rassie spot on

Nah Rassie is a 13 year old girl on Twitter…..that’s spot on. Marler is a moron, identifying with another maverick.

Both have a sense of humour which you clearly don’t

Giggling like a teenage girl on a dancing video, with his gut wobbling all over the place is kind of funny….the fact that it’s the Director of Bok Rugby doing it is embarrassing.

As we have a sense of humour

Support for the Woke agenda is overwhelming, doesn’t make it right.  Anti authority positions are always popular and given the people Harrassmiss is taking on aren’t employing him, it takes no guts to do it. But the moment his employers told him to apologize he ditched his beliefs and apologized like a good little boy. Nothing to respect here.

Trump is not thick ….arrogant certainly….but he was right on so many things. Notably Federal Reserve policy where he schooled Chairman Powell who was listening to all his economists….and kept the US out of the malaise that effected Covid Europe.  You are listening to the ‘experts’ again.

Perhaps part of Rassie’s appeal is down to confirmation bias.

He played and coached at the highest level. When ordinary fans see him being on the same page as they are, it’s appreciated.

Many of us have been complaining about the old boy’s club for a long time and Rassie helped to expose them to some degree.

I think people appreciate that.

The only reason Maler is so “ in Love” with Rassie, is because maybe it will give ENG better odds in beating us without R present.

Mpower you really are thick

No Moz - Trump is thick

Not worth the argument on Trump…..you probably still believe the Russia collusion story Dave. Never argue with a brainwashed person.

Here’s an adult take on Harrassmiss:

For the Lions it was a case of a missed opportunity. Getting pulled into, and beaten, in the sort of attritional game that suited their hosts, South Africa, was a mistake and an avoidable one at that. The unavailability of Finn Russell for the second Test might have forced Warren Gatland’s hand, but the sort of ambition required to wrest the initiative from the Springboks was not apparent until late in the deciding third Test, by which time it was too late.

The backdrop to this Test series was marred by the behaviour of Rassie Erasmus. Anybody that has read and understood the 80-page judgement of World Rugby against Erasmus cannot honestly continue to defend him.

On his part, anyone not suffering from a bunker mentality would apologise and keep quiet until his ban was served. If it is true that Erasmus is making a documentary about his side of the story, the South African rugby board should have the courage to take preventative action of its own. Without it their pledge to draw a line under the episode and move on is hollow and disingenuous. 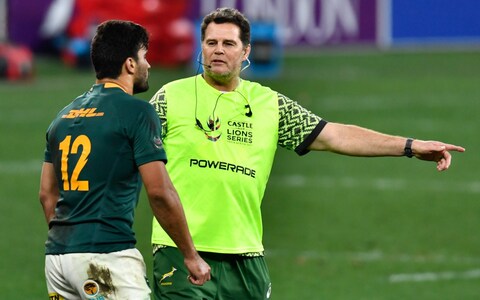 I like the styles of both Trump and Rassie.

I guess that means I win haha

Actually their styles are very similar, including Trump’s unconventional use of social media to build up a following…..that went right over Dave’s head. But in fairness he’s pretty short.

Difference is Rassie uses humour while stupid Trump tries unsuccessfully to bully his way through life. The guy acted like a schoolboy brat all the time as he was too stupid to articulate a compelling argument

The difference is 30 IQ  points and several billion dollars in Trump’s favour.

Guy also gets much respect from the mob.

Two groups that don’t generally hand out respect just for the sake of it.

Anyway, you guys fight it out. Odd balls that push the boundaries and ruffle feathers always get my vote haha

"Anyway, you guys fight it out. Odd balls that push the boundaries and ruffle feathers always get my vote haha"

Trump is ADHD...mind is all over the place, but there's coherence,  even if the normies doesn't get it most of the time...just difficult to follow the jumps in logic.

30 points on Rassie my arse - no chance in hell


Erasmus meaning:
a male given name: from a Greek word meaning “beloved.”
https://www.dictionary.com
You need to Log in to reply.