The highest rated EA Sports FIFA XI of all time

Lionel Messi and Cristiano Ronaldo may have dominated world football for a number of years, but neither of them make it into the best XI of players to be featured on EA Sports’ FIFA.

Both Messi and Ronaldo have peaked at a rating of 94, which we’re afraid doesn’t cut the mustard to get into the ultimate Ultimate Team.

In a 4-4-f*cking-2, we’ve taken a look at the best XI to grace the game across all of its previous editions.

It was always going to be him, wasn’t it? The only question was which era Buffon made the cut.

Weirdly, Buffon was coming off the back of a 2003-04 season in which Juventus finished just third in Serie A, with six teams conceding fewer than the 42 goals the Old Lady let in.

And the goalkeeper had also suffered disappointment at Euro 2004, as Italy were knocked out at the group stage despite being unbeaten.

Buffon was, however, named in the UEFA Team of the Year and also won the IFFHS World’s Best Goalkeeper award, although he missed out on the Serie A Goalkeeper of the Year honour to Dida.

Another Juventus player coming off the back of a disappointing season, Thuram was a defensive don on a host of football games in the mid-2000s.

In the summer of 2004, Fabio Capello was appointed Juve manager and Thuram was mainly used as a centre-back but was named as a right-back in the 2005 edition of FIFA.

Sticking with Serie A, and once more with the 2005 edition of the game, Nesta was deemed to be at his peak after helping Milan win Serie A, conceding a measly 24 goals in 34 games in the process.

But it was his team-mate Andriy Shevchenko who graced the cover alongside Patrick Vieira and Raul. 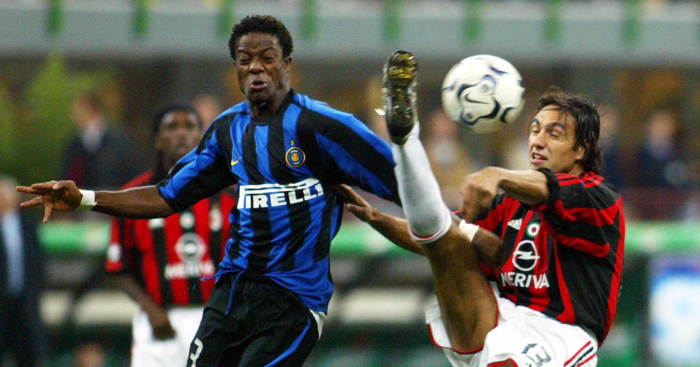 The only former Bolton player on this list, Hierro was approaching the end of his Real Madrid career when he was given such a high rating by EA Sports, although he had just won a fourth La Liga title and would go on to end the 2001-02 campaign with a third Champions League.

We still can’t get our heads around the fact he scored 26 goals in all competitions in 1991-92.

A god of FIFA games thanks to that jackhammer of a left foot, Carlos appeared on the cover of the 2003 edition but was deemed to be at his best two years later.

Slotting into this side on the right hand side of midfield, Figo was at his pig’s head height of fame and infamy, having just won his first title with Real Madrid following his controversial move from Barcelona.

We can’t help but think it was a mistake not to have him on the cover, although that may have seriously affected sales in Catalonia.

The only outfielder in this team still playing and a genuine curveball, Brighi was the highest rated player on FIFA 2003, beating cover stars Thierry Henry, Roberto Carlos and Ryan Giggs.

He had spent the 2001-02 season on loan at Bologna, being named the Serie A Young Footballer of the Year award as a 21-year-old. Sure, he was good, but nobody can quite work out why he was so highly rated in the game.

Brighi has endured a nomadic career in Italy but continues to turn out for Empoli.

Another member of the Galacticos who was obviously going to be in the side somewhere, Zidane had just been named in the Euro 2004 Team of the Tournament, but it’s strange to think he had already won the last trophies of his career by this point.

Technically a CAM on the game, Ronaldinho gets the nod on the left flank as that is often where he operated for Barcelona, and his rating of 95 beats both Lionel Messi and Cristiano Ronaldo’s peaks of 94.

The Brazilian may have only been the best player in the world for a relatively short time, but he was still untouchable during that period.

Proof once and for all that the OG Ronaldo trumps the new pretender Cristiano.

Honestly, he was so f*cking good.

The only player in this XI to be plying their trade in the Premier League at the time of their FIFA peak, Henry was in the midst of five-consecutive seasons of scoring 30+ goals in all competitions and was extremely Va Va Voom.